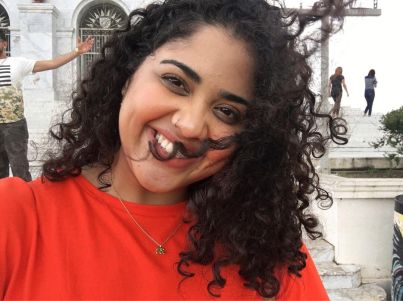 Reflecting back to the time when I was preparing myself to embark on the journey to Argentina, I could not help but wonder what my experience would be like. I spent some time thinking if I would fit in and if I would be accepted for who I am. In the U.S. as an immigrant from the Dominican Republic I have experienced and witnessed racism and discrimination towards my community and myself. But, if I am honest the last thing I thought was that I would experience these in Latin America. It took me by surprise how overwhelmingly white Argentina is.

I vividly remember being called “morocha” and “negra” when walking down the streets of Buenos Aires or while riding the subway. Something I had never experienced before. Unlike the U.S., Argentinians did not hesitate to call you black in public yet similarly to the U.S. I felt like I was being watched through every move. For me, it was crucial to find a space where I could feel safe and connect with people who look like me.  And Xango, an organization for the educating and cultivating of the African culture and identity, was that space for me.

It served me as a space for learning, growing and finding myself. Through my time with amazingly beautiful people in the organization, I learned so much about the black community in Buenos Aires as well as in the rest of Latin America. I learned about my own blackness. I had never been in a spacelike Xango, which celebrates my identity as a Latinx but also a black woman. I did not have access to such spaces in the U.S. and I was struggling with my racial identity before my semester in Argentina. Xango was such a vital part of my process as I was empowered and challenged to think about my African ancestry. I had a level of consciousness about my African roots prior to this experience but had yet to take the time to learn more about it and more specifically the African culture in the Dominican Republic.

I would not be as comfortable, passionate and empowered about my Afro-Dominican identity if it was not for Xango, where I learned resilience and community are key to loving my skin.